Precious Life says the revelation that 1091 babies were killed by abortion in Northern Ireland during the past 11 months is a damning indictment of Government hypocrites.

Director of Precious Life Bernadette Smyth said, “Since last March we’ve been listening to the UK government and NI Department of Health preaching to us about protecting and saving lives. But they are hypocrites! In the past 11 months they have permitted and approved the killing of 1091 little babies in Northern Ireland.

"It is all the more outrageous that at a critical time when necessary and life-saving care such as cancer treatments are being postponed - abortion is given priority in Northern Ireland."

The number of babies killed was revealed in response to a question from Christopher Stalford MLA for South Belfast. The Department of Health said 1091 abortions were carried out since March 2020.

Mr Stalford said, “We warned of the potential scale of abortion in Northern Ireland prior to this legislation being introduced. There is nothing like a majority in favour of this regime imposed upon us by a Labour MP from a London constituency. However, eleven months on, it is now clear that the number has exceeded the forecasts. In this pandemic, we have quite rightly, championed the protection of life. At the same time, we have witnessed the ending of the life of 1091 unborn babies …This is a very sad statistic and something that as a society we need to do everything in our power to reverse. I will continue to stand up for the right to life,”

North Antrim MP Ian Paisley has written to the Northern Ireland Health Minster Robin Swann asking him to explain how he has allowed situations to arise where cancer operations and kidney transplants have been cancelled because of covid pressures and against advice of clinicians yet at the same time abortion procedures are continuing. He said, “The number of abortions now being performed in NI is increased tenfold yet life-saving operations are cancelled.”

In his statement, the DUP MP said he had spoken to the most senior clinicians and surgeons who say they are willing and able to continue with surgeries but have been stopped.” Yet at the same time resources and effort is made to increase abortion services in NI.”

Bernadette Smyth concluded, "Even one abortion is one too many. But 1091 babies killed is absolutely shocking and horrific. I urge everyone to sign our Repeal Section 9 petition. We will continue our Repeal Section 9 Campaign until the right to life and full legal protection is restored to every unborn child in Northern Ireland." 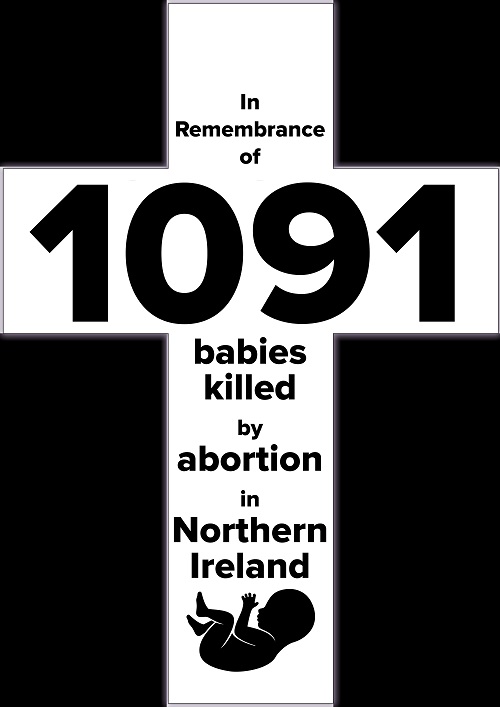