The events marked one year since abortion was legalised in Northern Ireland. The pro-life group said the LIFE CHAINS were held in remembrance of 664 babies killed by abortion since the legislation came into force.

Last year on 21st October 2019, Westminster forced abortion on Northern Ireland. The legislation contained in Section 9 of the NI (Executive Formation) Act removed the sections of the Offences Against The Person Act that had protected unborn babies in Northern Ireland. Department of Health (DoH) figures released at the start of October 2020 revealed that 664 abortions have now been carried out in Northern Ireland.

Speaking outside Stormont, Director of Precious Life Bernadette Smyth said, “The theme of our Life Chains today is RESTORE PERSONHOOD for Northern Ireland’s unborn babies. We mark the first year anniversary of one of the darkest days in Northern Ireland history, when the Westminster Parliament forced abortion on Northern Ireland, aided and abetted by pro-abortion MLAs in our Assembly.”

“We held these LIFE CHAINS also in remembrance of the 664 babies killed in Northern Ireland since abortion was legalised.”

“The DoH figures expose the hypocrisy of the Government and pro-abortion MLAs in our Assembly. For the past 6 months we’ve been listening to them preaching to us about protecting and saving lives. But the abortion law they implemented has now led to the killing of 664 innocent unborn babies. They have allowed more lives to be lost to abortion than have been lost to the coronavirus in Northern Ireland.”

In a poignant display, hundreds of baby shoes, each with a boy or girls name pinned on them, were laid out on the ground in the shape of the figures “6 6 4”

The highlight of the event was when a baby heartbeat monitor was held to the stomach of a young pregnant mother, and heartbeat of the baby in her womb was amplified through the PA system.

The Stormont event finished with a emotional ‘thank you’ from a mother holding her baby son Noah, who was born because of the help and support offered by Stanton Healthcare pregnancy resource in Belfast.

Bernadette concluded “As long as a single precious unborn baby is in danger, then our work is not yet finished. Our LIFE CHAIN events today sent out a clear message to our Assembly - REPEAL SECTION 9 and RESTORE PERSONHOOD for Northern Ireland’s unborn children.”

A big THANK YOU to everyone who organised or took part in LIFE CHAINS in your area.

Click HERE for more pictures from the Life Chains and Stormont Event... 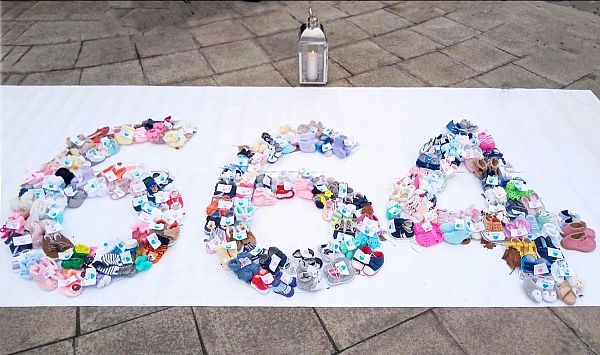