Thousands march in Dublin at the All Ireland Rally for Life

Precious Life joined thousands of people to march through Dublin City Centre this weekend for the Annual All Ireland Rally for Life.

Traffic was brought to a standstill as the crowd stretched the length of O'Connell Street. The recent U.S. Supreme Court ruling on abortion was a big feature of this year’s Rally. Placards were held saying, "Bye Bye Roe, Hello pro-life future."

On stage near Custom House, rally speakers praised the efforts of pro-life campaigners in the U.S. They also said Ireland would reverse the legalisation of abortion in Ireland.

Bernadette Smyth, director of Precious Life and co-founder of the Rally for Life, promised the crowd to make abortion in Ireland, north and south, not only illegal, but unthinkable.

“This years All Ireland Rally for Life has taken on a whole new level of hope and joy as a result of the pro-life victory in the USA. For half a century, millions of Americans prayed, marched, and worked hard for this historic victory”, she said.

Referring to the pro-life victory in the USA she said, "Today we share their joy. I am personally proud to have marched with my fellow pro-life brothers and sister so many times at their Annual March for Life in Washington DC. Today we commend and applaud all the pro-life movement in the US! Thank you Pro-Life America!”

She concluded, “We now celebrate the beginning of the end of abortion. The overturning of Roe v Wade gives hope to the global pro-life movement. After this amazing victory in the USA, we vow to continue in our efforts to make abortion illegal and unthinkable again. THE NORTH IS NEXT !” 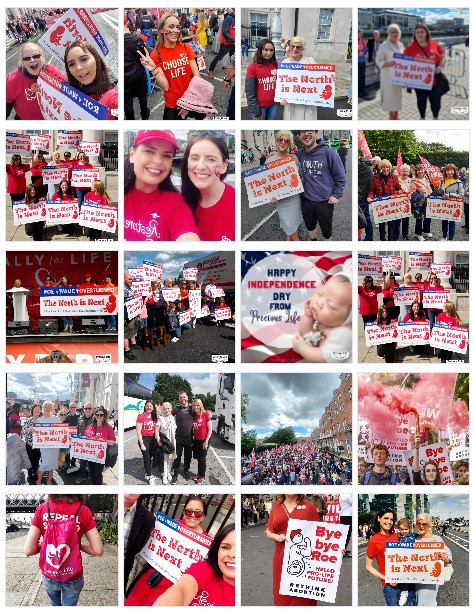