Precious Life welcomed the historic ruling by the US Supreme Court which overturned “Roe v. Wade” – the case that unleashed nationwide abortion-on-demand in 1973 and resulted in the deaths of 63 million American children.

The long-awaited victory for the pro-life movement means that abortion will be effectively banned in more than 20 states in the immediate future.

Director of Precious Life Bernadette Smyth said the ruling was a wake-up for people in Ireland, Norther and South.

"There's a lot to be learnt from what happened in the US. Pro-life campaigners never gave up in their battle to have ‘Roe V Wade’ overturned. I thank and congratulate all the pro-life activists in the USA – many of them personal friends of mine - for their unceasing hard work to reverse Roe V Wade and achieve this great victory for unborn babies.

“Pro-life people here were devastated by the legalisation of abortion on the island of Ireland. But this massive victory for life shows that abortion legislation can be overturned. The lives of millions of innocent babies will be saved. The US ruling gives us so much hope for the future and has reinvigorated us to carry on the battle here to reverse the legislation of abortion in Ireland."

The ruling from the US Supreme Court judges declares Roe v. Wade was “egregiously wrong from the start…Its reasoning was exceptionally weak, and the decision has had damaging consequences …The Constitution makes no reference to abortion, and no such right is implicitly protected by any constitutional provision …It is time to heed the Constitution and return the issue of abortion to the people’s elected representatives.”

The ruling holds massive ramifications, both immediate and long-term. More than 20 states currently have laws on the books that would effectively ban abortion within their borders upon Roe’s fall, from pre-Roe abortion bans that went unenforced to “trigger laws” designed not to take effect until a ruling like today’s. In those states, abortion will now be illegal. Pro-lifers in Congress can now pursue a nationwide abortion ban, as well. 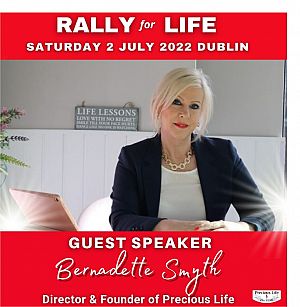 Bernadette Smyth added, “The All Ireland Rally for Life on Saturday 2nd July will now take on a whole new level of hope and joy as a result of the pro-life victory in America. For half a century, millions of Americans prayed, marched, and worked hard for this historic victory. I share their joy and I am proud to have marched with them so many times at their Annual March for Life in Washington. I will personally commend and applaud them all in my speech at the All Ireland Rally for Life. Thank you Pro-Life America!”

She concluded, “The 63 million unborn children who lost their lives to abortion deserve this Court ruling. We now celebrate the beginning of the end of abortion. The overturning of Roe v Wade gives hope to the global pro-life movement who will be celebrating this historic victory. When the personhood of the unborn child is recognised then abortion collapses. After this amazing victory in the USA, Precious Life vow to continue in their efforts to make abortion unthinkable and illegal in Northern Ireland. We will never give up until every unborn child is protected in law, policy and practice”.