25 Jan 2022 - Precious Life has condemned the hypocrisy of the NI Department of Health, pro-abortion Assembly Members, and the Westminster Government, after it was revealed 2,394 unborn babies were killed by abortion in Northern Ireland since March 2020. Precious Life said the pro-abortion MLAs complicit in the deaths of these babies will be "named and shamed" in the forthcoming Assembly Election in May.

BACKGROUND: Abortion regulations from Westminster came into force here in March 2020 following the passing of Section 9 of the NI Executive Formation Act in Parliament the previous year, while the Stormont Assembly was suspended. Section 9 removed the legislation contained in the “Offences Against The Person Act”, which had protected unborn babies in Northern Ireland for over 150 years.

In their latest abortion statistics released on Thursday (20th January)  the NI Department of Health (DoH) admit they killed 63 babies in the 2020/21 period.

However, TUV leader Jim Allister said the data "only shows the tip of the iceberg" in Norther Ireland. While there have been 63 abortions in hospitals in 2020/2021, he said, the DoH confirmed to him that there had been 2,394 abortions in NI since March 2020. "Transparency from the Department when it comes to the issue of abortion has been sadly lacking", he said, "…it is important that people know the total figure since our laws changed as of November was 2,394, far greater than the figure being reported."

Director of Precious Life Bernadette Smyth said, "Even one abortion is one too many, but this figure of 2394 is shocking and horrific - 2394 little babies killed by a so-called department of 'health.'

"This is what Westminster has inflicted on Northern Ireland through their Section 9 legislation. And their forcing of Section 9 on Northern Ireland was supported by Sinn Fein, SDLP, Alliance Party, Green Party, and other pro-abortion Assembly Members. These MLAs are now complicit in the deaths of these 2394 babies.

"Unborn babies are alive, they are human, and they deserve our protection just like women who find themselves with unexpected pregnancies. There are compassionate solutions we can offer to women, rather than the final solution of abortion. The deliberate killing of little babies in the womb should be unthinkable at a time, but especially during these past 22 months when the emphasis has been on saving lives."

She added, "It should be noted that the Department of Health never once use the word ‘baby’ in their abortion statistics bulletin.  However, 11 times they callously use the cruel and dehumanising term 'Product of Conception' to describe these babies killed by abortion. Yet, only 3 days before the Department released their statistics, the Chief Medical Officer for Northern Ireland was urging pregnant women to get vaccinated. He said '…vaccination is the most effective way you can protect yourself and your unborn baby.'

"The NI Department of Health, the pro-abortion Assembly Members, and the Westminster Government are all hypocrites!"

Bernadette Smyth concluded "We will not let the killing of these babies be forgotten. The Assembly Election is only a few months away. Our VOTE PRO-LIFE CAMPAIGN will name and shame every MLA who supported Westminster’s Section 9 legislation that has now led to the deaths of 2394 babies. And Precious Life’s REPEAL SECTION 9 CAMPAIGN will continue until personhood and full legal protection is restored to every unborn baby in Northern Ireland." 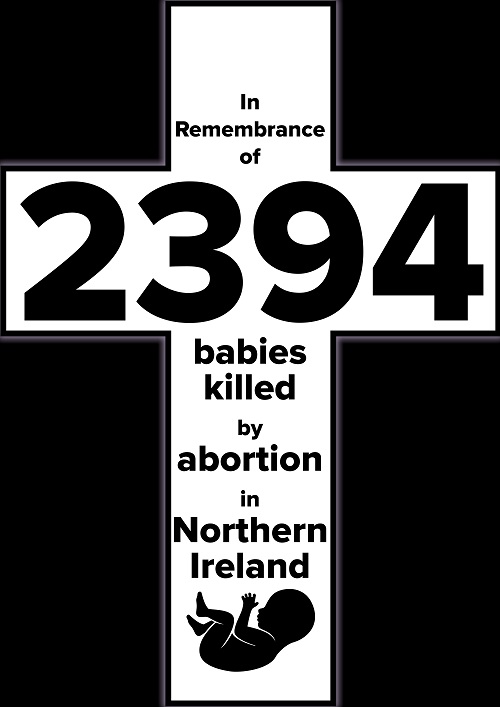