Following Westminster's latest evil move to force more abortion on Northern Ireland, Precious Life held a poignant display in Belfast City Centre to give humanity and personhood to the 1556 babies murdered by abortion in Northern Ireland.

Hundreds of baby shoes, each with a boy or girls name pinned on them, were laid out on the ground in the shape of the figures 1556

The event was covered by the media, with UTV reporting that "...Precious Life created a artwork using pairs of baby shoes to form 1,556 - signifying the number of abortions carried out in Northern Ireland since the regulations were introduced last year."

Speaking to the media, Director of Precious Life Bernadette Smyth said “Each pair of baby shoes here represent a little innocent human life cruelly taken from the world by the injustice of abortion, which was forced on Northern Ireland by the Westminster government."

"And scandalously, there are politicians here in Northern Ireland who have given their full support to the killing of these babies, and even more shockingly, they are calling for more to be killed. They have the audavity to describe abortion with words like 'healthcare' and 'compassion'. I challenge them to look at these beautuful little shoes and tell us where is their compassion for the little babies so brutally killed.

"Our unborn children must be protected in law, policy and practice in Nothern ireland. We are calling on all elected representedatives to repeal Section 9 and restore personhood for every child in the womb.” 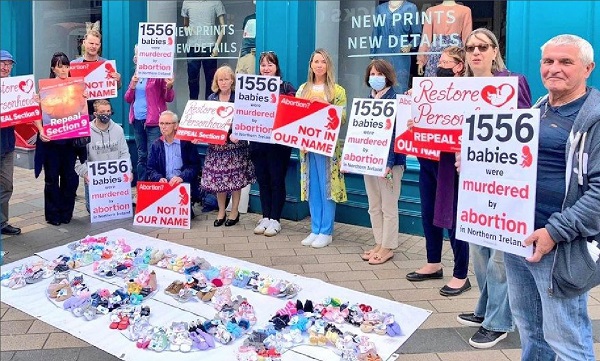