Precious Life has condemned the Westminster Government’s complete contempt, not only for the human rights of unborn babies, but also for the principles of democracy and devolution in Northern Ireland. [Watch VIDEO below or click here if you have problems viewing the video on a mobile device...]

Westminster has directed Stormont's Department of Health to commission full abortion - killing an unborn baby for any reason, right up to the moment of birth - in Northern Ireland. Changes to abortion laws took effect last year after Westminster forced abortion on Northern Ireland through Section 9 of the 'NI Executive Formation Act' while the Assembly was still collapsed in 2019. But since the Stormont Assembly has been up and running again, the full commissioning of abortion has been stalled due to disagreement within the five-party executive.

However, in March 2021, Secretary of State Brandon Lewis took unprecedented powers allowing him to force Stormont to commission full abortion.

In a written statement to Parliament, Mr Lewis said he was issuing the direction to the Department of Health, Health Minister Robin Swann and to the Health and Social Care Board.

According to the BBC, the latest figures from Northern Ireland's Department of Health admit that 1556 babies have been killed by abortion since March 2020.

But Brandon Lewis said he was "extremely disappointed" that more babies haven’t been killed. He even had the audacity to claim he had "a moral obligation” to ensure more unborn babies were killed here.

He said that the killing of unborn babies in Northern Ireland is “the clear will of Parliament.”

It is understood Mr Lewis has told the Stormont parties that he believes costs of the killing babies by abortion here should be met by the Stormont executive.

It's the second significant interference by Brandon Lewis on Northern Ireland in just over a week. But unlike when the Stormont parties united to oppose proposals on the Troubles legacy - Sinn Fein, SDLP, Alliance, UUP and Green Party WELCOMED his total override of devolution.

Westminster’s abortion plan was criticised by DUP MP Carla Lockhart said abortion laws should be decided by Stormont - "What we have in this statement from the secretary of state is a further example of a government acting with no respect to the local electorate and locally elected politicians...The DUP stand ready to find a locally agreed way forward. We urge all parties who sit with us in the Northern Ireland Executive to share this intent."

Westminster’s proposals for abortion will still need to go to the five-party executive, where any substantive discussion is likely to lead to even more division.

Precious Life will step up the REPEAL SECTION 9 Campaign to ensure full legal protection is restored for unborn babies in Northern Ireland. If you can help, please contact us TODAY - tel: 02890278484 or email info@preciouslife.com 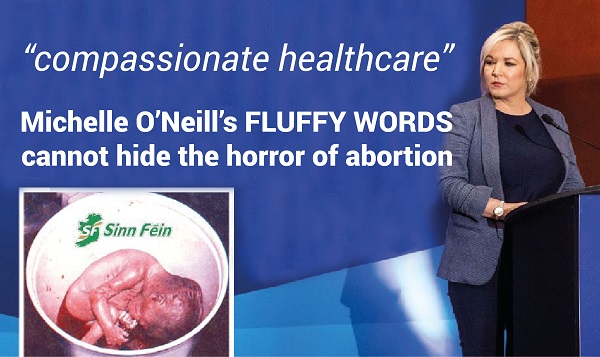