A shocking new video report reveals that the University of Pittsburgh is a major hub for the trafficking of and experimentation on aborted baby organs and body parts. The report links the funding for the university’s operation to a large grant from U.S. COVID-19 guru Dr. Anthony Fauci’s NAIAD office at the National Institutes of Health (NIH).

Produced by the Center for Medical Progress (CMP), the 6-minute video was released in in conjunction with pro-life hero and CMP founder David Daleiden’s testimony before Pennsylvania’s State House of Representatives exposing government-sponsored grotesque experimentation using aborted baby parts at the University of Pittsburgh (U of Pitt).

In December, LifeSite reported that the University of Pittsburgh has been conducting medical research by grafting scalps from aborted babies onto rodents.

After publishing a report in the National Catholic Register about the many ways that aborted children are being used for scientific research at major universities and hospitals in the United States, author Stacy A. Trasancos tweeted a summary of her horrifying findings.

She linked the Mengelian research to Fauci: Aborted baby scalps grafted onto mice. Their organs transplanted. Humanized mice developed at the University of Pittsburgh, all to study the immune system. Supported by Dr. Fauci’s NIAID. Paid for by us.

Trasancos is Executive Director of Bishop Joseph Strickland’s St. Philip Institute of Catechesis and Evangelization in the Diocese of Tyler, Texas.

These are crimes against humanity that should be prosecuted. Silence in the face of these atrocities simply adds to the evil. Wake up America! Demand that this stops NOW!

But as the CMP video reports, “It gets worse.”

“The University of Pittsburgh is a hub for some of the most barbaric experiments carried out on late term aborted human infants — experiments funded by the United States government,” explains the narrator. “At the same time, the University sponsors the local Planned Parenthood abortion business in what looks like an illegal quid-pro-quo for fetal body parts.”

The video shows a photo from a protocol developed by another University of Pittsburgh scientist “for harvesting the freshest, most pristine livers from five month-old aborted babies in order to isolate massive numbers of stem cells for experimental transplantation into adults.”

“You can see the premature baby, aborted alive via ‘labor induction,’” continues the description. “Under surgical drapes, with the umbilical cord off to one side as the baby is cut open to harvest the liver.” 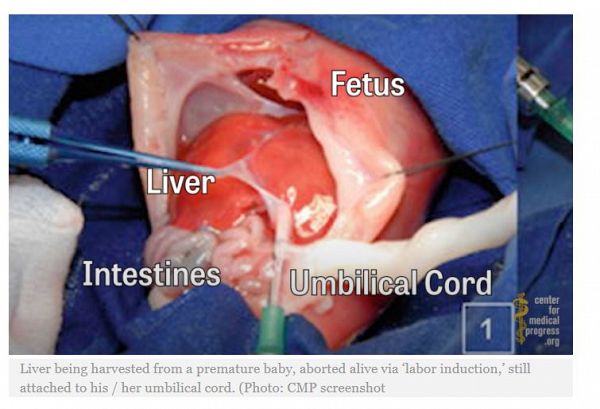 The U of Pitt scientist who developed this experiment received nearly $3 million from NIH.

The video also notes that U of Pitt has benefitted from a multi-year, $1.4 million grant from NIH’s GUDMAP project, establishing the university as a major distribution hub for aborted fetal kidneys and other fetal body parts for NIH-funded projects across the country.

The University of Pittsburgh’s long history of barbaric fetal experimentation

The video includes archival footage from unethical experiments filmed in the 1950s by the U of Pitt’s Dr. Davenport Hooker, who tested the reflexes of born-alive babies until they died.

“Two years ago, sources told CMP that Pittsburgh was one of the major hubs of the FBI’s investigation of Planned Parenthood’s involvement in the human trafficking of aborted fetuses. This isn’t surprising, because CMP undercover investigators were told previously by Planned Parenthood Western Pennsylvania (PPWP) abortion doctors who were on staff at Pitt that they supplied the University’s tissue bank,” explains the video.

The video goes on to note how many of the most notorious abortion doctors and Planned Parenthood leaders were either trained at the University of Pittsburgh or are currently connected to the school.

“It all starts to look suspiciously like an illegal quid-pro-quo over aborted fetal organs and body parts, all funded by tax payers,” notes the video, which concludes urging viewers to call Pennsylvania State Representatives to demand answers and accountability form Planned Parenthood and the University of Pittsburgh.